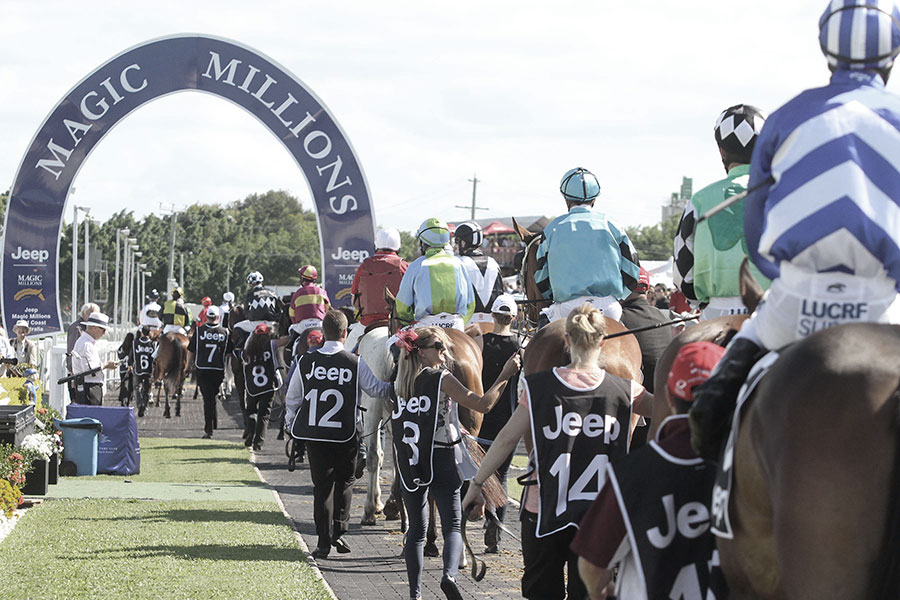 After celebrating Australia Day 2016, who would have predicted the following would have occurred so far this year:

The Australian breeding and racing industry is in very good shape. Gee it is resilient despite wider economic concerns. The Magic Millions (as it does each year) has set the scene. With vets run off their feet and “short lists” running into many pages, the signs indicated a bumper sale. CEO Vin Cox was smiling like a Cheshire cat throughout, this sale was one for the ages.

The international buying bench boasted a who’s who that appreciated the quality on offer whilst enjoying the exchange rate discount (and fun in the sun!). Europe, Asia and the United States all very well represented with some welcome new faces and some returning from a spell. Credit should go to the Magic Millions but also Aushorse Marketing, headed by Tom Reilly, for its concerted effort in promoting the Australian product.

The domestic buying bench featured many partnerships, with trainers, syndicators and bloodstock agents forming teams to attract supporters. This is a reasonably new phenomenon where the buyer of a horse is often listed as a team. With healthy prizemoney on offer especially the $10,000,000 Magic Millions raceday, many were willing to pay a premium so that they could wear their team colours at next year’s raceday. The strong market for tried stock be it stallions, broodmares off the track or geldings to Asia, provides a further incentive to perhaps pay a bit more. So as you are tempted to bite into a lamb chop this Australia Day, perhaps take a moment to raise a glass and be thankful that we have a thoroughbred industry the envy of the rest of the world that augers well for some good years ahead despite wider economic concerns.

Pinhookers may have been inspired by those of the cattle trading fraternity, because some seriously good profits were had on certain transactions. For the uninitiated, pinhooking in this instance is the practice of acquiring a weanling (an immature horse after it has been weaned from its mother eg: May 2015), and holding, maintaining and selling as a yearling approximately 7 months later.

Clubhouse leader was Ampulla Lodge with its $300,000 purchase (Exceed and Excel/Common Smytzer) reaching $800,000, a cool $500k in 7 months.
At Stable Financial, our clients that are pinhooking usually “budget” to double the price ie: 100%. A review of the list of pinhook transactions reveals less than half achieved 100%. On further examination, after consideration of holding costs and selling expenses we estimate approximately 75% would be profitable. It needs to be also noted that many planned pinhooks do not eventuate due to unforeseen circumstances such as injury.

Some big transactions could be enough to tempt traders to pinhook, especially if sales companies continue to fund the transactions.

Stallion covering statistics have recently become available for the 2015 Australian breeding season. Large books of mares are obviously a good indicator of a stallion’s popularity.

If we take a look at the first season sires there were some big numbers indeed;

Some second season stallions returned to be popular again including;

Finally, based on the current leading sires 15/16 year by winners, the stallion statistics reveal;

The management of the optimal mare numbers to stallions can be problematic due to the balance between preserving the longer term fertility of a stallion against the economic return on investment. However, some stallions can thrive for many years regardless of the number of mares covered.

It will be very interesting to also examine the current foal crop when those numbers become readily available. A challenge for recent years in Australia and indeed worldwide has been a declining foal crop. The obvious impact this can have is on field sizes and betting turnover and ultimately industry funding from betting.

The national decline in live foals born in Australia is approximately 23% between 2009 (17,553 live foals) and 2015 (13,554 live foals). Despite the gradual decline we expect that this trend may have reached a floor given a steady season of coverings in 2015. Especially in Victoria where we may even see a rising foal crop. This is due to increased investment in the state by new entrants and the availability of more quality stallions. An increased foal crop in Victoria would support a very healthy industry backed by very good underlying prizemoney and breeding incentives.

Further interesting reading can be found in the Racing Australia Annual Report that covers the 14/15 racing and breeding season.

Total racehorse registrations declined by 646 or 5% to 11,832 (12,478 last year). However the number of racehorse syndicates and syndicate members remained steady.

We believe that this area of ownership will increase in future years. There is a continued focus on regulation in this area with improved probity that provides added confidence to investors. Stable Connect holds an AFSL and works closely with the regulators in this area. It‘s our experience that new entrants to the industry, including new syndicators, appreciate the extra probity and professionalism associated with managing owners’ expectations and enhancing the experience of racehorse ownership. In particular, Victoria appears to dominate this form of ownership.

Horse exports increased by 263 or 18.5% to 1,680 (1,417 last year) A more favourable Australian dollar assists but we believe the main driver is a greater understanding of the quality of the Australian product. Australian stallions that shuttle to the Northern Hemisphere and Australian racehorses competing successfully overseas, assist with awareness and “branding” of our offering. The efforts of Aushorse Marketing should also be acknowledged. The residual value of a racehorse can be an added bonus for racehorse owners. Whereas prizemoney and lifestyle dominates involvement, an offer from Hong Kong for a gelding that can be in excess of $1 million is a happy return on investment. This is a selling point that is very real.

The team at Stable Financial offer expert tax and business advice to thoroughbred industry participants worldwide. You may be surprised at the information that we can provide to assist improve your business such as benchmarking reports and analysis of trends in the industry. We hope that you enjoyed the read and that we may be able to meet with you in the future.

We wish you all a very successful yearling sales season and happy Australia Day,

For more information on how Stable Financial can benefit your business, please contact Adam Tims 0410 437 887.